Amino acids (AAs) combine to form a three-dimensional protein structure and are of very much importance in understanding the biophysical properties of biomolecules. Basically, the nature and the arrangement of the AAs in a protein backbone is only responsible for the individual characteristics of the macromolecule. The AAs in a protein backbone are influenced by the solvent molecules hence, it is very important to have a clear idea on the solubility, stability, and thermodynamic properties of these AAs in various solvents and co-solvents. A basic level of quantifying protein-solvent interactions involve the use of transfer free energies, ΔGtr from water to solvents. The values of ΔGtr for side chains and peptide backbone quantify the thermodynamic consequences of solvating a protein species in a co-solvent solution relative to pure water. Based on the transfer model and experimental Δ Gtr for these AAs, it has been proposed that these cosolvents exert their effect on protein stability primarily via the protein backbone. The Δ Gtr of AAs from water to another solvent system will be either favorable or unfavorable. By definition, an unfavorable transfer free energy, Δ Gtr > 0, means that the protein becomes solvophobic on transfer to a solvent, whereas a favorable transfer free energy, Δ Gtr < 0, represents that the protein becomes solvophilic on transfer to a solvent. The sign and magnitude of the measured Δ Gtr quantifies the protein response to changes in solvent quality. Therefore, this review will provide the basis of a universal mechanism for co-solvent-mediated (that includes the new novel biocompatible ionic liquids (ILs)) protein stabilization and destabilization as the protein backbone is shared by all proteins, regardless of side chain sequence. 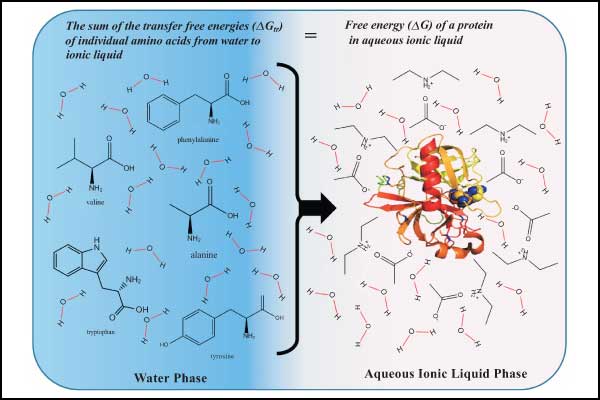