In this study, the preconditioning of anaerobic culture by aging was carried out followed by testing various pretreatments (heat shock and alkali) to improve H2 production. It has turned out that aging could enhance the hydrogen generation meanwhile heat- and alkali curing led to comparable H2 formation activity with a slight advantage of the former one. Subsequently, the heat treated microflora was applied under different pHs and Gas to Liquid phase ratios and according to the statistical analysis both were significant factors since they affected not only the hydrogen productivity but also the developing H2 partial pressures in the system. Furthermore, an indirect relationship between hydrogen productivity and hydrogen partial pressure was found, which means that higher H2 turnouts were associated with lower H2 partial pressure conditions. The PCR-DGGE analysis of the microbial community after heat- and alkali pretreatments showed the dominancy of Clostridium species. 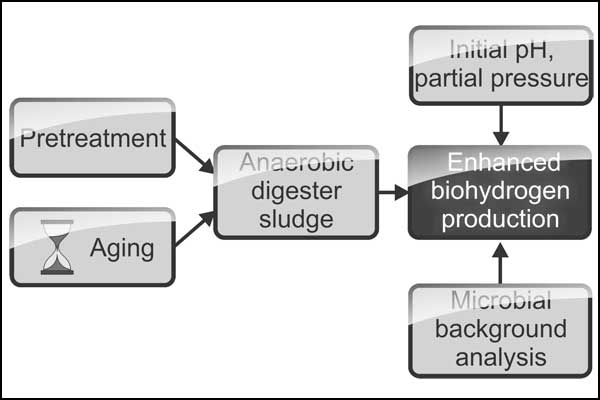