Effect of Choline Acetate on the Yeast Cells During Fermentation: Kinetics Approach


Background: Ionic liquids (ILs) are claimed as green solvents and have demonstrated ability in the dissolution of several biomaterials and polymers, thus promoting their applications in wide scope. The aim of this study was to evaluate the yeast cells in the ionic liquid (IL), choline acetate [Cho]OAc as an eco-friendlier IL for their growth and ability of fermentation of the empty fruit bunch (EFB) biomass for ethanol production via monitoring the cell growth curve and kinetics.

Methods: The Saccharomyces cerevisiae was cultured for five days on yeast extract-peptone-dextrose (YPD) agar and the sub-culturing was carried out every two weeks to evaluate the growth of yeast in [Cho]OAc at different concentrations; 5%, 10%, and 20%, where it was pre-cultivated for 24 h at 30 °C and 150 rpm in a shaking incubator as a control culture. Yeast cell number was determined by counting using a hemocytometer. Also, the kinetic growth of yeast during the fermentation of EFB was evaluated.

Result: Cell concentration increased, ethanol production increased along with the optical density with the peak reached at 72 h, then declined. Enzymatic hydrolysis process followed by fermentation of EFB using [Cho][OAc] improved the yield of sugar, saccharification and ethanol around 1.938, 2.879, and 2.165 times in comparison with untreated EFB with IL. Furthermore, values of specific growth rates obtained in IL-medium and non-IL-medium are applicable for ethanol production to take place. The results showed the ability of yeast cells for fermentation even in the presence of IL.

Conclusion: The results showed that the presence of the IL did not suppress the growth of the yeast cells and did not impair the fermentation productivity. 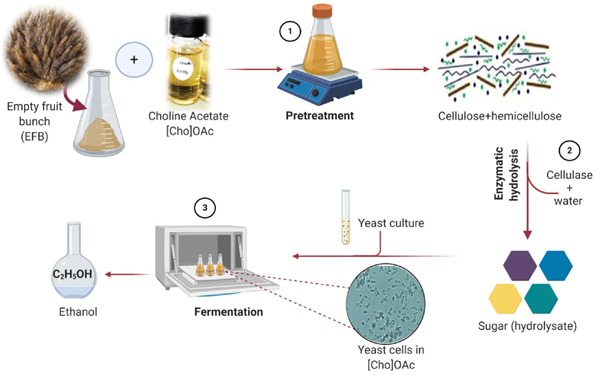